Ian Cooke-Tapia is a Panama-born multidisciplinary storyteller, illustrator, and entrepreneur. His practice focuses on intradisciplinary subject matter as means to explore the fluidity of the rules of our reality, and ignored social narratives. See more of his work here. and find him on twitter and Instagram. 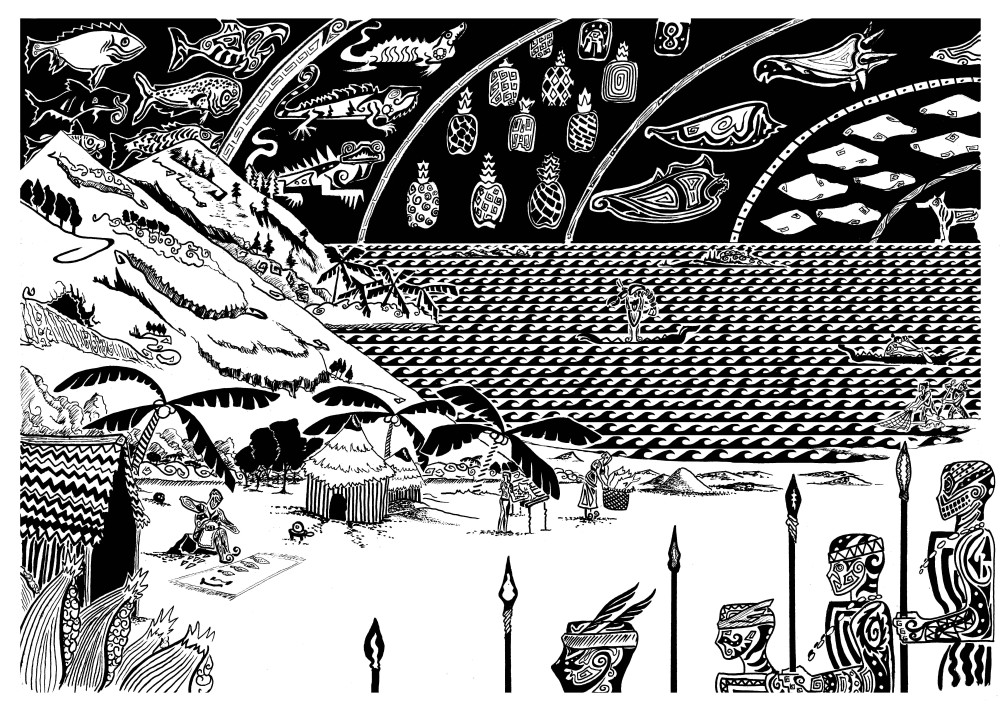 An Incomplete Timeline of Isthmian Identit(y/ies)

Whichever narrative is decided, sold, packaged, retold and consumed is the one accepted, and possibly becoming the basis for a whole group’s identity. What, then, becomes of those people groups who cannot tell their stories?

Presented as a visual dialogue between Spanish medieval tapestries such as Devoción de Nuestra Señora and pottery designs of the Conte style of the Gran Coclé cultural region of the Panamanian Isthmus, An Incomplete Timeline of Isthmian Identity(y/ies) tries to tell one story of the Isthmo-Colombian cultural region. This work exists as a metaphorical meeting point: five ‘scenes’ that speak of a very particular moments in history, all based on ethnoarchaeological evidence. The realities of oppression remembered and currently happening, as well a conscious abandonment of positive, usually pro-European, interpretations of the period of Contact between “New” and “Old” worlds.

The visual narratives are presented through composition-based metaphors of power and object relationships, some hidden in the details. The use of Pre-Columbian patterns to give shape to native peoples and animals and culture born from these. The process of making this Timeline created its own meta-dialogues: between scientific, cultural, artistic and social inspiration sources. Even now, months after finishing this project, I find that the conflict of perspective is the prevalent dialogue within this piece. Me, as an outsider to these “indigenous” cultures, living in Europe and talking about issues I’ve only experienced through second-hand accounts, trying to get my own interpretations of artistic traditions play nicely together.

It is perhaps that existing friction that best exemplifies the very uncertainty at the core of any culture born from the Contact period, something that is exists as an ongoing amalgamation process that began when a Genovese sailor opened up a dialogue between continents.