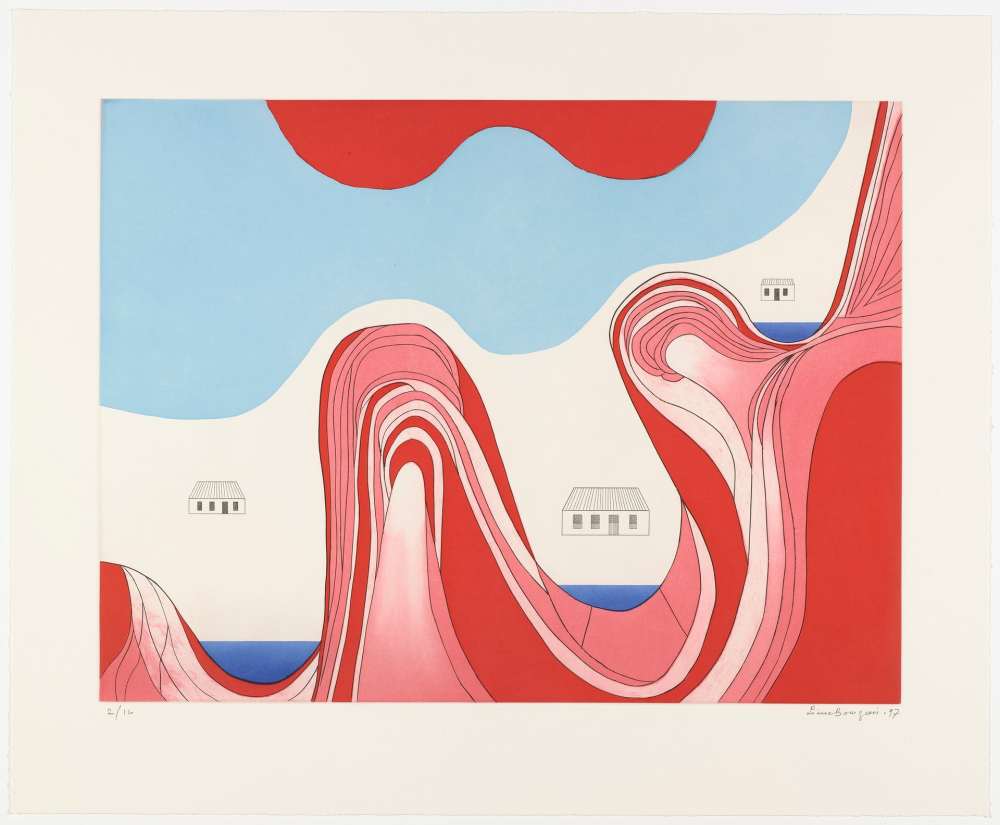 Anita Goveas is British-Asian, based in London, and fueled by strong coffee and paneer jalfrezi. She lurks in libraries and her local independent bookshop, Bookseller Crow. She was first published in the 2016 London Short Story Prize anthology, most recently in Pocket Change, Haverthorn, Moonchild Magazine, Riggwelter Press, Anti-Heroin Chic, former cactus mag and Litro. She tweets erratically @coffeeandpaneer. This short story was previously published in Haverthorn.

The man is small and thin, like a washed-out finger chili. Anjali sits next to him gingerly, rubs her back, then spots the bookbag.  Another happy parent, the world is saturated with them, six at least on this bus. Meanwhile, her back is aching, her hips are sore, with nothing to show for it. He notices Anjali’s awkward postion and grins. She smiles back warily.

“How many weeks are you?”

Anjali blinks, follows his questioning gaze. There is a gentle curve to her wool-covered belly. She places her hands on the ghost of five months ago.

“Um, eight?” She purses her lips too late to swallow the lie. It slips out more easily than responding to muttered sympathies, mutually blushed with embarrassment.

“Enjoy it while it lasts! I’m on the way to pick up the oldest, haven’t slept a wink for four years!”

Her second smile is wider. Darren-proud-father-of-two, as he introduces himself, elaborates about baby-led weaning ( ridiculous), toddler-baby jealously (not a myth) and the importance of choosing a good nursery as soon as they’ve popped out (sets them up for life). Darren says she should definitely find out the baby’s sex, who wants hundreds of yellow baby-grows. The conversation flows until she misses her stop at Old Kent Road.

Home finally, she explores the site of misunderstanding. One of the fluffy grey socks she’s made for Haroon was caught in her jumper, an illusion of fertility. She balls it up and places it over her belly-button, a small orb of potency. The muscles in her back relax slightly.

Dinner is simple, cumin-scented daal, rice, crisp fish-fry. Comfort food. She can’t swallow mango chutney after eating it with everything for weeks, but it’s Haroon’s favourite. She watches it plop on his plate in syrupy yellow mounds.

“Did you make it to see Mr Foster? He’s being kind, keeping your job open.” he says, pulling out the bones from his piece of mackerel and mashing flakes of flesh into his rice.

She tears away from his ravaging of her perfectly-cooked offering to his hopeful eye-brows, and twitches her shoulders.

“I didn’t feel up to it today.” She should have put his dinner in a blender, saved him the trouble of all that destruction. His eyebrows retreat to their usual place, hovering above his watery cow eyes and lashes meant for their daughter. “But I do need to get out more. I might try the library next week.”

Night-time is when she goes through the should-haves, while Haroon dribbles and snorts into his pillow. Worked less, drunk more water, been more aware. Now there are other considerations.

This time she hovers eagerly next to the toned-looking woman in navy-blue trainers with the green and grey jogging stroller. She’s oval-faced, with a sleek black bob with purplish high-lights, like squeezed-out tamarind. Her wide-faced infant is drinking juice from a sippy cup, wearing a t-shirt covered in fuschia ducks.

Anjali has tried several outfits before venturing out, settling on leggings and a grey thigh-length kurtha. The socks are wrapped in a clean linen pillow-case and secured with a chiffon scarf, the swell approximating four months. She’s jiggled the reproduction to ensure its stability against unexpected traffic-stops. The only thing she’s not practised is how to start the conversation.

The other woman nods, moves her lime-green Puma backpack, and gestures to the empty seat. Luisa is her first, that’s her with her favourite bear, this is when she first walked, this one’s when she started nursery. Her sister says if she waits too long to have another, they’ll fight. Her husband says she should eat more. Her father says she won’t be promoted now, her mother says Luisa cries for an hour when she leaves. Exercise is her saviour, but more sleep would be lovely, eyes closing as she smirks.  Elena works part-time now, there aren’t enough hours in the day, but of course Luisa is worth it.

Anjali is hiding the bundle in her beside-table drawer, when Haroon ambles in, scratching his curly head.

“Where are my grey socks, sweetheart? Did you wash them?”

She pushes the corner of the pillow-case down, closes her eyes, shakes her head.

“Haroon Chabra, is that all I am to you now?  A maid-servant?”

His gaze follows her as she brushes past him. The fluttering in her gut could be satisfaction.

She waits nine days before the next outing. Her hands and feet went hot and cold every morning and the tingling made her nauseous, then wistful. She swapped the socks for folded teal-blue cotton hand-towels, an old wedding present hidden in the loft because they don’t match the bathroom. They’re layered into a six months belly, skimming her area of previous knowledge, and silky against her stomach like an extra skin.

The woman’s cropped beige hair is edged with grey, like a mouldering samosa.  There are folds between her mouth and chin and above her thin, straight nose. Something about the way she stares as Anjali eases into the seat causes her to clasp her creation. The red-faced baby in the lollipop-printed blue pram coos intermittently, and gets an instant response. White lacy blanket straightened, buggy book adjusted, Burberry-checked babygrow smoothed. They sit together in nose-scratching, head-twitching silence from Champion Hill to Camberwell Green before the baby tries to eat his right foot and they mutually beam.

Claire says, I bet you thought I was his grandmother, didn’t you? Claire says, what’s wrong with wanting a career first? Bradley’s important to me, but he’s not my only legacy. Why don’t people wake up to the 21st century? We have choices, our bodies belong to us.

She’s ironing their cream damask table-cloth when Haroon folds up the Times and plays the messages on the answerphone. They listen together to Mr Foster’s message in head-twitching silence. The office is fake sympathy, averted eyes, abrupt changes of subject. She won’t go back.

Haroon rolls towards her in his sleep that night, and she shoves at his heavy arm.

“I won’t try again yet, I’m not ready, ” she says with her hands clenched. He grunts as she rubs her taut abdomen, fingers tracing the ugly scar.

She’s on an almost empty bus, post school-run, sat automatically by the space for the pram. In recognition of the last time she’ll do this, she’s wrapped the socks in the hand-towels and the table- cloth. Rain is streaking the window, and the distension is obscured behind a navy-blue raincoat. But the pressure is comforting, and she’s rubbing it in circles, branding the feel over her skin.

Her meditation is disturbed by a plastic car bouncing off her black ankle boots, and a murmured apology in a soft accented voice.

The space is filled by a red double-stroller, holding a sleeping chubby-cheeked baby and a wide-awake black-haired toddler. The woman sitting next to her has curly auburn hair, dark shadows under her eyes, and lightly pock-marked wheatish skin, like a perfecttly-cooked chapati. They all smell like cardamon and chocolate.

Nour is on her way to the park while her oldest Delisha is in school. Bahir is a handful, doesn’t start nursery for five months, but Leila sleeps through anything.  Listen to him singing ‘Wheels on the bus’ and she’s quiet as an angel. They’ll visit her real angel, Shaheen, who came before Bahir, in the cemetery tomorrow. The singing, and the reading, the park, and the school-run fill the ache in the daytime but it’s at night you remember, don’t you?

Anjali moves to help the stroller off the bus, and Nour waves her away.

“You need to think more of yourself, but thank you. Good luck with the baby! This is my card, we’ll do coffee some time?”

She stands by the doors, watching them recede, clutching the cardboard until it leaves a thin red line on her palm. What brought them together is an invention, a barrier to further shared sympathies.

When Haroon rolls to her rigid body, she doesn’t move away. She grabs his wrist, counts the strong  regular pulsebeats.

“Do you think about Rupa? She’d be three months old now.”

He shuffles his head toward her shoulder, splays a long-fingered hand over her belly,

“Every day, sweetheart. Every day.”

It’s a risk to look for Nour again, wearing the bulkiest accessory, but speeches sound rehearsed and she deserves full disclosure. If she can find the words to tell Nour, perhaps this can all make sense again. She hears her name and smiles, then her knees stop working and her throat dries up.

Jasminder shouldn’t be on this bus, her neighbour has a car. They’re frozen in consternation, Jasminder’s eyes on the hideous, alien protuberance. Until they jerk to a stop, and Anjali bolts through the doors.

She cuts up every shred of fabric with scissors, flushes it down the toilet. The damask is expensively dense, blocks up the pipe. Water gushes onto the black and white tiled floor. She lies down in the shambles, back aching, hips sore. She was too weak to keep her baby, too consumed to move on. There are no words for Nour, for Haroon, for herself. This is her legacy.